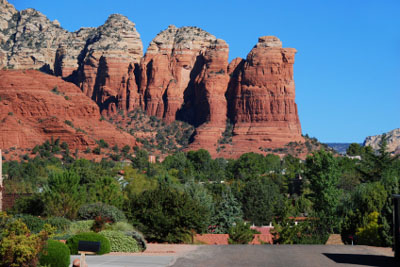 Standing tall at the west end of Sedona sits Coffee Pot Rock, perfectly poised to pour the first cup of morning refreshment for the countless neighbors living in the shadow of this unique and colorful monument. Visible from all over town, Coffee Pot Rock mimics a percolator style pot, complete with spout. The base of Coffee Pot Rock is deep Sedona red, with slight striations of white and pink. The lid of the Coffee Pot is striped beige and orange, further resembling the clear top of the percolator. A visual wonder, Coffee Pot rock is one of Sedona’s “Red Rock” must sees!

Although located in a popular neighborhood, the trail to Coffee Pot Rock could be considered the road less traveled. Crowds are at a minimum and many hikers report having the trail all to themselves. Combine this with the low intensity elevation gain, just 400 feet over 2.5 miles, and you have one of the area’s most beautiful hikes and best kept secrets.

The trailhead is found on Coffee Pot Drive, just off Highway 89A. Coincidently, the trailhead is shared by other nearby hiking destinations, Teacup and Sugarloaf Summit. When you leave the parking area the trail will immediately split. Ignore the Summit Trail Forest Service sign, and take the left fork for a short distance until you reach another split. There are no signs this time so watch for it and take the right fork. You will quickly reach a “T” intersection meeting up with the Thunder Mountain Trail. Turn right. Soon you find another split, with Summit Trail appearing on the right once again. Keep heading straight and after about another 0.5 mile, there will be another unsigned trail on your left. Near the trail there is a large bush, and area hikers attempt to mark the bush with a circle of stones, but the best indication of the trail is to look straight ahead. The massive Coffee Pot Rock rises majestically out of the sandstone and towers over you in the near distance.

At this point the views become even more dramatic. Chimney Rock is visible on the left and Cathedral Rock is even visible in the far distance. The trail starts to climb a bit, but is quite manageable and although there are a few other unmarked trails, keep following the beaten path at this point and soon you will find yourself under the spout of Coffee Pot. There are plenty of side trails to explore, many with worn steps in the sandstone and rock cairns to assist with climbing.

Although not typically listed as one of the “official” vortex sites around Sedona AZ, at 5,600 feet, Coffee Pot Rock is the highest point in town and some spiritual believers in vortex energy count Coffee Pot Rock as a definitive site of energy release. Typically vortexes are geological rises or depressions, signaling whether they release energy or help draw energy inward. For visitors interested in the vortex phenomenon, Coffee Pot Rock lets you be the judge.

Head southwest on Highway 89 A from the “Y” at Highway 179 approximately two miles to Coffee Pot Drive. Turn right for 0.5 mile to Sanborn and turn left. Look for Little Elf Drive, which ends at Buena Vista Drive. Watch for the “hiker” sign, and the trailhead is just around the bend on the left.