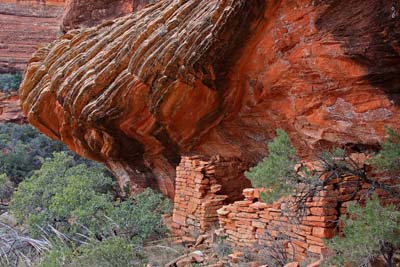 Sedona is famous for its uniquely beautiful landscape. Just mention its name and visions of red rock buttes, rising canyons, shimmering creeks and wilderness areas appear. Serene, tranquil and sacred. It is no wonder the ancient Sinagua Indians chose this area as home over a thousand years ago. They inhabited the Sedona and Flagstaff area until about 1400 when they mysteriously disappeared.

Evidence of their existence is littered everywhere. They stand stately as well-preserved Indian Ruins that are tucked on the surrounding cliffs, deep within canyons and along flowing waters. Some are secretly hidden only known to a few. There is no doubt others that have yet to be discovered at all.

It takes long hikes to view and experience some of these treasures while others are openly observed under the watchful eyes of rangers that protect them. Fragments of artifacts still lie around along hiking trails and petroglyph engravings are scattered through the region.

Indian Ruins Within The Sedona Area

The following ruins of the Sinagua are all within 20 miles of Sedona. These places only require short walks from paved parking lots. Each requires a nominal entry fee. It is your duty to protect these ruins for future generations to enjoy. When you visit these sites, sit, admire and envision what life was like many centuries ago.

Montezuma Castle. Located just southeast of Sedona near Camp Verde AZ. Montezuma Castle is one of the oldest, best preserved ancient cliff dwellings in the Southwest. This five-story dwelling was built into the side of a cliff by the Sinagua Indians during the 12th century. For mysterious reasons, Montezuma Castle was abandoned in the 1400s. Read more about the history and story of Montezuma Castle.

Palatki Indian Ruins. Just like Montezuma Castle, the Palatki Ruins were originally built by the Sinagua Indians during the 1100s. Many archeologists believe it was abandoned because of extended drought or because of invasion by ancient enemy tribes. This Palatki Heritage Site has two trails. One leads to the well-preserved cliff dwelling and the other leads to rock art alcoves with messages left by the ancient ones as evidence of their prehistoric civilization. Read more about the Palatki Indian Ruins in Sedona.

V-Bar-V Petroglyph Heritage Site. Actually there are no ancient Indian ruins at this site about 18 miles south of Sedona. However, there are over 1,000 of the most well-preserved petroglyphs at this location. It is an archeological treasure-trove of ancient history when the ancient ones lived in this area of the Verde Valley. Generations have come and gone leaving these inscribed messages for the world to enjoy. Discover more information about V-Bar Heritage Site.

Things To Do & Experience In Sedona