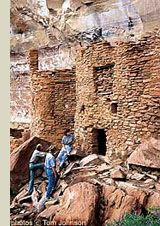 The Palatki Ruins and Rock Art are off the beaten path just outside Sedona but well worth the historic experience. To get there, travel Highway 89A west from Sedona to Forest Road (FR) 525. Turn north. Palatki will be about 6 miles along some very rough, bumpy roads. Park Rangers will tell you about the history of the site. There will be a modest entry fee to the Palatki site.

There are actually two sites. One is the actual ruins of the Sinaqua Cliff Dwelling and the other is over 1,000 petroglyphs and pictographs carved and painted into the rocks and formations by prehistoric natives that occupied the area during various times in ancient history.

The Palatki Ruins are hidden behind some trees and if you didn’t know the dwelling was there, it would be easy to miss. Palatki is a Hopi Indian word meaning “red house”. The cliff dwelling was built by the Sinaqua Indians (Spanish for “without water”) about 1150 and was mysteriously abandoned at about 1300. It’s interesting to note that the Sinaquas also built Montezuma Castle, the cliff dwelling ruins about 50 miles east of this site near Camp Verde, Arizona. It’s plausible that the Sinaquas were eliminated by other enemy tribes in the area or vacated this area due to a lengthy drought adversely affecting their ability to grow necessary crops.

The cliff dwelling site is two stories tall and you can still see sooting on the rock walls which would indicate a longterm fire pot probably for heating during the colder winter months. You’ll find remnants of historic pottery, but be aware that removing anything from the site is a federal offense that is aggressively pursued. According tot he Rangers and evidenced by the ceiling heights of the dwelling, the Sinaquas were short people of about 5 1/2 feet tall.

The Rock Art site is nearby the cliff dwelling ruins, but the two sites are not related to each other. The pictographs and petroglyphs on the wall of the red cliffs date back to 6,000 years ago, thousands of years before the Sinaqua built the cliff dwelling. The rock art includes ancient pictorial writings left by numerous native prehistoric people that preceded the Sinaquas. There are even writings and names carved into the rocks by settlers in the area dated in the 1880s.

Visiting The Sites
The two trails at the Palatki Heritage Site, one to the cliff dwelling and one to the rock art alcoves are easy walking but are not handicap accessible. There are rest areas and water stations. Nearby is another ancient cliff dwelling and rock art site called Honanki meaning “bear house”. Ask the rangers at Palatki for directions.

Reservations are required. Call 928 282-4119 Monday through Friday. See the map below for directions. The forest roads are generally passable to passenger cars when dry, but there are some rocky stretches.

Besides the historical feature, visitors will be rewarded with amazing views of the redrock formation for which Sedona is famous. The ruins reside at the edge of the Red Rock Secret Mountain Wilderness area. You won’t be disappointed.